August 4, 2014 By Andrea Connell in Books Leave a comment 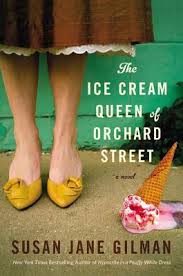 I don’t generally use the term “riveting” in my reviews, as it has become so common amongst reviewers that it has turned cliche. However, I am at a loss to find another word that describes precisely how absorbed I’ve been in this novel over the weekend. When I steal every moment for a quick fix, forget where I am while the page is open, and take the book in the bath, for crying out loud- well, that’s the definition of riveting.

Our heroine, the brash, sarcastic, and rather unscrupulous Malka Treynovsky, flees the pogroms of Russia for a new life with her family in the heart of immigrant New York in 1913. Life in the golden land is not what her family expects, and soon Malka ends up orphaned, disabled, and nearly thrown into an institution. The same Italian ices peddler who disabled her also takes her in, but Italian family life is no easier than Jewish tenement life on Orchard Street, and Malka, renamed Lilian, survives by adaptation, observation, and pure gumption. Despite betrayal and manipulation and hardship, Lilian marries Albert Dunkle, a stunningly handsome yet illiterate friend of the family, and together they create the Dunkle Ice Cream Company. The consequences of Lillian’s choices and the effects of the instability of her childhood shape who she later becomes: “The Ice Cream Queen of America”–the maven of delectable deliciousness, pioneer of industry innovations and creations, with a grandmotherly television persona. Behind the mask, however, the fame, the riches, the manipulations, and paranoia from the past eventually cause her world to founder….

This novel is many things. It is a character study of self-destructiveness; an examination of the rags-to-riches personality; and a story of the early 20th-century immigrant experience in America. It is a social commentary on the evolution of American consumer and pop culture. It exposes the cynicism behind ruthless marketing campaigns, and the cutthroat competition even in such a “happy” field as ice cream production or children’s television.

Lillian Dunkle’s voice is loud and brash–one can hear the full-blown New York accent in her words. She addresses us personally, not afraid to throw her harsh realities and judgements directly in our faces. “So sue me” is her favorite phrase and becomes her catch word throughout the book, defending actions that she KNOWS were not proper, yet believing in her right to do them anyway. I didn’t know how to feel about Lilian: her circumstances were horrifying, her trust in family had been shattered, and yet…in some ways she was a victim of her own making. A complex character, she is.

Gilmans’s writing is superb–not for one moment did I, the reader, feel alienated from a scene or tossed out of time and place. Each settling was utterly absorbing (and at times made me squirm in discomfort). The novel spans 70 years, from 1913 to the Second World War all the way through the 1980s, and it is clear the author has done her research because of the subtle integration of historical elements into the flow of the narrative.

I came across The Ice Cream Queen of Orchard Street while at Book Expo America this year, searching through the list of historical fiction on offer. I stood in the signing line for at least 45 minutes, but everyone was good-natured and excited, and when I got closer to the front I discovered why: true to the theme of the book, the marketing campaign for Gilman’s novel was grand! Each person was given a huge Haagen-Dazs ice cream bar (choice of three flavors offered by a woman in a 1950s candy-striped smock!)  to enjoy while we waited for our 30 seconds of discourse with the author and a signed hardback copy.  When you read the book, you’ll understand the significance of that gesture. I thought the marketing was brilliant….especially after being on my feet for 8 hours in a crowded convention hall!

The copy I have just reviewed is the signed hardback from BEA. I am reviewing it of my own volition, with no urging from author, publisher, etc.